Dr. Craig Keener, Professor of New Testament at Asbury Theological Seminary, was the featured speaker for Carroll Institute’s Spring Colloquy on May 19 – 20, 2014, attended by doctoral students, faculty, and scholars. The theme of the Colloquy was “Jesus and Mighty Works,” with lectures in three plenary sessions on the topics of the historical Jesus and his miracles.

He is married to Médine Moussounga Keener, who holds a Ph.D. from the University of Paris. She was a refugee for 18 months in her nation of Congo (her story is in process of becoming a book). Together Craig and Médine work for ethnic reconciliation in the U.S. and Africa. Keener’s own pilgrimage from a teenage atheist to a devout believer investing himself in the study of the Scriptures against their historical background is a profoundly encouraging story.

Keener has authored 17 books, four of which have won book awards in Christianity Today. His IVP Bible Background Commentary: New Testament (2nd ed., 2014) has sold more than half a million copies (including editions in several languages). Among his recent books there are major commentaries: The Gospel of John: A Commentary (Hendrickson/Baker Academic, 2003); The Gospel of Matthew: A Socio-Rhetorical Commentary (Eerdmans, 2009); and the widely-hailed Acts: A Exegetical Commentary (vols. 1-2, Baker Academic, 2012-14; vols. 3-4 are forthcoming). The Colloquy lectures featured material from The Historical Jesus of the Gospels (Eerdmans, 2009) and its two-volume sequel Miracles: The Credibility of the New Testament Accounts (Baker Academic, 2011).

The first lecture established a premise about the genre of the written Gospels. Their counterparts are found, Keener argued, in the biographical narratives (bios literature) of the Greco-Roman world. He put the question succinctly:  “The Gospels are ancient biographies of a recent figure [in this case, Jesus]. Ancient biographies of recent figures normally preserved a significant amount of accurate information about those figures. Why would anyone expect otherwise about the Gospels?”

The following lectures probed the perennial, philosophical obstacle: even if the Gospels are reliable biographies, they contain miracles accounts that informed, modern readers deem implausible. Keener took on the methodological skepticism of many scholars and in particular the classic objection formulated by David Hume: “It forms a strong presumption against all supernatural and miraculous relations, that they are observed chiefly to abound among ignorant and barbarous peoples” (David Hume, Of Miracles, II. 3).

Keener’s target was to challenge one of the arguments for why miracles could not occur: Hume had argued against the reliability of eyewitness testimony by appealing to uniform human experience against miracles. The bulk of Keener’s Miracles provides abundant evidence to the contrary; he toppled Hume’s skepticism with comparative experience and testimony from the Majority World, both ancient and modern. In the words of Richard Bauckham (University of St. Andrews), “Keener mounts a very strong challenge to the methodological skepticism about the miraculous to which so many New Testament scholars are still committed. It turns out to be an ethnocentric prejudice of modern Western intellectuals. So who’s afraid of David Hume now?”

Keener’s lectures can be viewed at our YouTube channel. 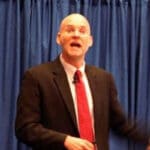