Carroll graduate, Abraham Barberi, is the founder of One Mission Ministries and the director of the “Sola Scriptura” Baptist Bible Institute in Matamoros, Mexico. On March 22, 2014 the Institute celebrated its official inaugural ceremony. The building was dedicated to God and in memory of Reverend Paul Bellington who had served as a missionary in Mexico.

Over that same weekend, Dr. John Neesley presented a Bible conference entitled “The Gospels Alive.” Over eighty students from the Institute attended. During that conference, Dr. Neesley presented to the Bible Institute a beautiful certificate on behalf of B.H. Carroll Theological Institute as a token of its continued support and partnership with the Institute “Sola Scriptura.” Dr. Neesley reported, “God is using One Mission Ministries leader Abraham Barberi to direct the Bible Institute & pastor the adjacent church.  In the last two months he has appeared three times on Matamoros network television debating a Catholic leader on religious issues.  The Carroll grad debated a priest on the 1st episode.  After the priest was profoundly defeated, the Catholic Seminary sent a theology professor, who struggled as well to match wits with our friend, Abraham.   Abraham has been a breath of orthodoxy in a culture filled with a mixture of tradition/superstition/emotionalism.”

Abraham Barberi and his family appreciate your prayers as they minister in an area renown for drug cartels & violence. 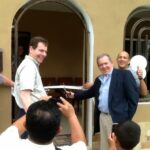