Dr. Richard Jackson Elected to Serve on Board of Governors

Dr. Richard A. Jackson, a longtime Baptist minister and President of Jackson Center for Evangelism and Encouragement in Brownwood, TX has been elected to serve on the Board of Governors of B. H. Carroll Theological Institute in Arlington.

He was elected to the post at a recent meeting of the board. Announcement was made by Dr. Leon Leach, Chairman of the Board and Executive Vice President of the MD Anderson Cancer Center in Houston.

“We are extremely pleased that Dr. Jackson has agreed to serve in this important role,” said Dr. C. Gene Wilkes, new president of the Institute. “Dr. Jackson remains passionate about evangelism and equipping the local church to reach others for Christ. His passion matches Carroll’s mission in every way.”

Dr. Bruce Corley, founding Carroll President who retired this month, commented, “I’m excited to have such a powerful voice and dedicated servant of God in our midst. Richard is a pastoral leader whose record of service is long and impressive, a man of integrity respected throughout the nation and the world.”

Born in Fort Worth, he is a 1956 graduate of Grapevine High School, son of a pioneer Baptist minister. He holds B.A. Degrees from Howard Payne University in Brownwood (1960) and Southwestern Baptist Theological Seminary in Fort Worth (1963). His seminary degree is the equivalent of today’s Master of Divinity Degree. He was awarded Honorary Doctor of Divinity Degrees by both Grand Canyon University in Phoenix, AZ, and by his alma mater, Howard Payne University, on whose Board of Trustees he served for three years.

Dr. Richard Jackson Elected to Serve on Board of Governors

For a quarter-century, he was pastor of one of the nation’s mega-churches, North Phoenix Baptist Church in Arizona. Retiring there as pastor in 1993, his leadership was credited with the church’s phenomenal growth. Membership grew from about 500 to more than 22,000.

He has held pastorates in Texas churches such as May, Bluff Dale, Cleburne and Sulphur Springs. During recent years, he has served as interim pastor of 11 churches, most recently First Baptist Church of San Angelo. He also teaches at Howard Payne while directing the work of the Jackson Center. Dr. Jackson receives many invitations to preach at churches throughout the United States.

Dr. Jackson is married to the former Wanda Alexander, his high school and college sweetheart. They have been married for 56 years and have three children and six grandchildren.

Jackson’s colleagues on Carroll Institute’s Board of Governors include Dr. Russell H. Dilday, Chancellor of the Institute; Dr. Don Newbury, Howard Payne University Chancellor and Vice Chairman of the Board; and Jerry W. Yowell, Secretary of the Board, CLU, State Farm Insurance, Fort Worth. 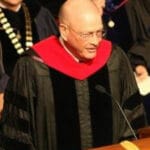