“The Book of the Twelve as One Book”

A Commentary by Dr. Bill Bryan

In his lectures on the Hebrew Minor Prophets, also known as the Book of the Twelve (BOTT) or just the Twelve, Dr. Paul Redditt presented the view that the Twelve is the product of a common redactional history. While this view is not accepted by all scholars, it has been generally accepted as a helpful theory for understanding the origin and organization of this portion of the Hebrew Bible. Dr. Redditt’s central argument in these lectures was that “the Book of the Twelve was a consciously, deliberately edited work that grew over time by assimilating and updating earlier prophetic words, redesigning them for their new historical contexts.”

In his first lecture, Dr. Redditt laid the foundation for his work by discussing prior redactional approaches to the BOTT, two important monographs by James Nogalski and Aaron Schart, and the work of a group formed by the Society of Biblical Literature (SBL) from 1994 – 2002 to discuss the topic of reading the Twelve as one volume. He also addressed critics, such as Ben Zvi, who oppose reading the Twelve as an edited collection.

In his second lecture, Dr. Redditt began to focus on three collections that were eventually joined along with the Books of Joel, Obadiah, and Jonah to form the Twelve. He argued that the first Book of the Four (i.e., Hosea, Amos, Micah, and Zephaniah) was formed as the Books of Amos and Hosea “were collected and edited in the north and carried to the south and re-edited there, where they were applied to new situations and amplified with new sayings.” The message of Micah was legitimized by Jeremiah (cf., Jer 26:9) and included with the messages of Hosea and Amos. The Book of Zephaniah was also connected redactionally to the words of Hosea and Amos. The common headings/introductions of these four books were added to link them together. Dr. Redditt further argued that the second Book of the Three (i.e., Haggai, Zechariah, Malachi) arose as a post-exilic collection. The Books of Haggai and Zechariah 1-8 were connected with a “uniform introductory formula with a built-in dating scheme.”  The prophecies of Zechariah 9-10 were collected and added to Haggai-Zechariah 1-8 soon after Zerubbabel failed to ascend to the throne, and Zechariah 11-14 was added in dialogue with the Book of Malachi within one-hundred years. Dr. Redditt suggested that there is “good evidence for suspecting that Zech 13:9a was constructed in light of Mal 3:2-3” through the discussion of God’s refining Judah with the fire of a refiner.

In his third lecture, Dr. Redditt discussed the formation of the Book of the Two (i.e., Nahum and Habakkuk), which collected prophecies related to the fall of both the Assyrian and Babylonian Empires. Dr. Redditt proposed that the Book of the Four, Book of the Three, and the Book of the Two were arranged in chronological order. However, three more individual books (i.e., Joel, Obadiah, and Jonah) were added at the appropriate points chronologically within the larger collection in order to bring the total number of books to the symbolically significant number twelve.

Dr. Redditt concluded his final lecture by citing three exegetical payoffs from reading the BOTT as a collection:  (1) the Twelve “ trace the history of God’s dealings with God’s wayward people, both in terms of the demise of the northern kingdom and the ultimate hope for restitution and reunification, the fall of the southern kingdom, its revival, the causes for the non-renewal of the Davidic monarchy, the ultimate triumph of God in Jerusalem, and hence the necessity for getting correct its temple, the sacrifices there, and the priesthood. (2) Using this way of looking at the Twelve, I begin to understand at least some of the puzzling fits and jumps that have dogged commentators for centuries. (3) I have gained something of an appreciation for how hard it must have been for biblical writers to look at the world around them and the failed hopes of their people and still speak a positive, albeit corrective, word to their contemporaries while maintaining continuity and faith with their own received tradition.” Furthermore, he noted three implications from his musings on the Twelve: “(1) That collection is comprised of materials that arose over time, but all in response to the crises of the fall of Israel, the fall of Judah, and the failure to rebuild the once-promised reunited kingdom with a Davidic king. It is, therefore, a work of hope. (2) It structures those remembrances and hopes as a Book of the Twelve, and presents them as lessons from the past as relevant teachings concerning both the people and the temple, the most important remaining societal entity in post-exilic Yehud. They can still instruct us today in our life in the world, experienced before God. (3) It is not, apparently, a collection of texts by or for the temple, but one that remembered and represented prophetic criticisms of the temple and also hopes for its purification all the way through Malachi, and its perfection and preservation in Zechariah 14. God’s way will ultimately prevail, so ‘Hang in there, baby, keep the faith.’” 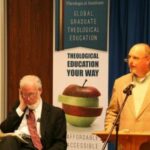